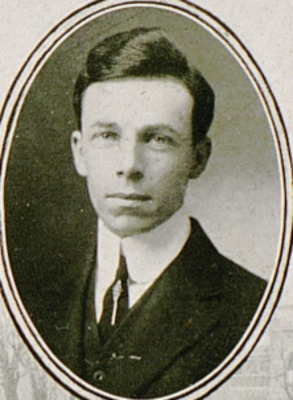 "We've had a great time You'll all agree." "Foxes have holes, the birds of the air have nests," but if there is any place on this mundane sphere where restless spirits find permanent abode, Bain has not yet discovered it. Possessed of a wandering disposition and love of adventure, he has flitted from place to place, and at least become convinced that "the West is his home." Bain is decidedly literary and has the rare ability of adapting himself to any situation. He might have been a Robin Hood or a Robespierre; while, had he been in Utah when Mormonism was in flower, Brigham Young would have been a bachelor.

George Bain Morrison (March 8, 1889 - July 24, 1958) was the son of Rev. Henry Clay Morrison and Laura Bain. Morrison practiced law in Lexington after receiving his LL.B. from the University of Kentucky. He occasionally served as a special police judge for the city. Additionally, Morrison served as the secretary for several Lexington mayors. He served in World War I as a Captain in the 138th Field Artillery Regiment and continued in this role upon his return to Kentucky. Morrison was heavily involved with the Democratic party's election efforts in Lexington.