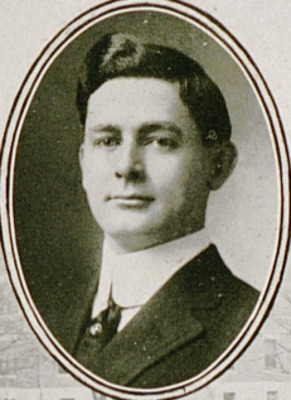 "Full many a flower is born to blush unseen, And waste its sweetness on the desert air." I'm grood in Law, and have only one fault to find with my college career, and that is that I have been horribly confused with McElroy. Yes, I'm a bashful "feller," but I know more girls than anybody, and they think I am handsome-that is, some of them do. Every man oughter fall in love at least once a week, but sic utere tuo ut alienum non laedas. My ambition is to ride my Missouri mule into Congress, but if "Old Beck" won't go toward Washington, I can still pitch more hay than anybody in our deestrict.

John Elvis Miller (May 15, 1888 - January 30, 1981) was born in Aid, Missouri to John Anderson Miller and Mary Kizzie Harper. Miller attended the Southeast Missouri State Teachers College and Valparaiso University before attending the University of Kentucky. Miller first practiced law in Searcy, Arkansas--he was a delegate to the Arkansas Constitutional Convention of 1918 and worked as a prosecutor for the state between 1919-1922. Miller represented Arkansas in the United States House of Representatives between 1931-1937. In 1937, he was elected to the United States Senate. He served in this capacity until 1941 when he was appointed as a federal district judge for the western district of Arkansas. Miller married Ethel Lucile Lindsey in 1914.