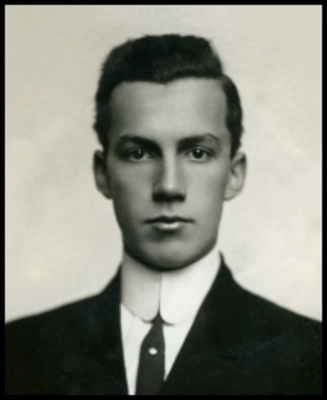 The little sport of his class and pit fiend at all musical comedies the only bad thing that can be said about him is that he still deserves knee breeches and the only good thing, that he is hell on all Cadillac-30's.

"A lover of queens, tarts, damsels, fair maidens and fluvias."

Ballard's middle name, Bryan, is incorrectly listed as Byron in The Kentuckian.

Richard Bryan Ballard (March 16, 1891 - August 3, 1936) was the son of William John Ballard and Eliza Hogan. After graduating from the College of Law, Ballard worked as a traveling salesperson for the Woolfolk Coffee Company and later worked as a druggist at the Henderson Drug Store in Lexington. Ballard served as a medic during World War I. Ballard first married Marion Huber in 1914 and later married Roberta Blaine. He is buried in the Ballard family plot at the Lancaster Cemetery.