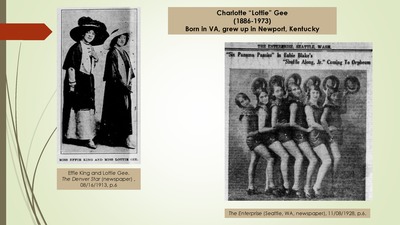 Charlotte “Lottie” Gee was born in Millborough, VA, and she grew up in Newport, KY. [The spelling of Millborough has been changed to Millboro.] Lottie Gee was a singer, dancer, and stage performer. She performed with a number of groups, one being the Smart Set when the company was led by Sherman H. Dudley who had replaced Lexington, KY, native Tom McIntosh who had replaced Bowling Green, KY, native Ernest Hogan as the lead man of the Smart Set. By the time Lottie Gee came to the Smart Set, a precedence had already been established for good Kentucky entertainers. Lottie Gee would leave the Smart Set to form a dancing and singing trio with Effie King and Lillian Gillan. In 1911, Lilian Gillan left the group and King and Gee became a duo known as the “Ginger Girls.” Lottie Gee is most recognized for her acting and singing in the 1921 Broadway production, Shuffle Along, written by Flournoy Miller and Aubrey Lyles. The show ran for 504 performances. Lottie Gee’s singing of the song “I’m just wild about Harry,” was unmatched. The song was written by Eubie Blake and Noble Sissle. [Noble Sissle’s parents had been enslaved in Kentucky, his father from Lexington.] Lottie Gee settled in Los Angeles, CA. where she died in 1973.