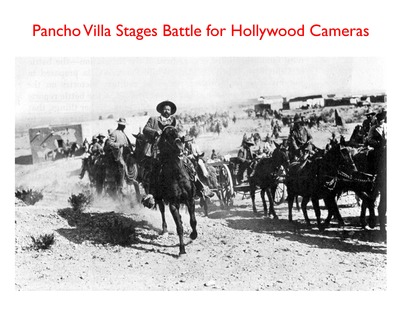 Doroteo Arango was an agricultural laborer and cattle rustler born in the northern state of Durango. He took the name of Pancho Villa when escaping from the law for having wounded a hacendado. He joined the Maderista Revolution early on, and although he had never gone to school or had military training, Villa became the most fearsome and brilliant general of the war, leading the famous Division of the North. The Mexican Revolution was the first revolution to be filmed by Hollywood. Normally, Villa would attack before dawn to gain the element of surprise but as we see in this photo, he attacked in full daylight in order to provide the best light needed by U.S. cameramen. Villa represented the interests of miners, transportation workers, and agricultural laborers who joined the Revolution in hopes of receiving a portion of land to cultivate. At first supported by the U.S., he lost this source of supplies when defeated by General Álvaro Obregón in 1915 and forced back to the northern state of Chihuahua where he operated as a guerrilla leader. Resentful of the withdrawal of U.S. support and their recognition of Carranza, he invaded Columbus, New Mexico in March 1916. Eighteen Americans and 80 Mexicans lost their lives in this confrontation. The U.S. sent General John “Black Jack” Pershing to Mexico in 1916 to capture Villa but Villa successfully eluded the Pershing Expedition which returned to the U.S. in 1917. Villa later made his peace with the new regime in 1920 and was ceded a hacienda and the right to have an escort of his own soldiers. Nevertheless, still seen as a threat by Obregón, he was assassinated in 1923.