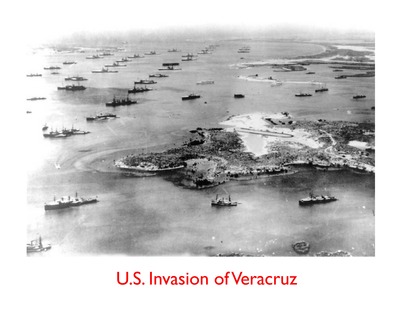 In March 1913, Democrat Woodrow Wilson assumed the presidency of the U.S. replacing Republican William Howard Taft. Horrified by the assassination of a constitutionally elected president, president Wilson refused to recognize the Huerta’s government and recalled Henry Lane Wilson (no relation) as ambassador of Mexico. After a conflict with U.S. sailors in the port of Tampico and the news that a shipment of German arms for Huerta was about to land in Veracruz, on Wilson´s orders, five hundred U.S. Marines and 300 Navy sailors disembarked in Veracruz on April 21, 1914. Nineteen Americans and 170 Mexicans lost their lives as the U.S. occupied the port. Naively thinking he was helping the Mexicans in their fight against Huerta, Wilson completely misjudged Mexican nationalism. This occupation almost united Carranza with Huerta, who both denounced this invasion of Mexican territory by a foreign power. It also failed to prevent the delivery of the arms since the German ships just sailed further south and unloaded their cargo. The United States withdrawal had to be mediated by representatives of the nations of Argentina, Brazil, and Chile and did not take place until November 1914. This photo shows the U.S. Navy ships stationed in the harbor of Veracruz.