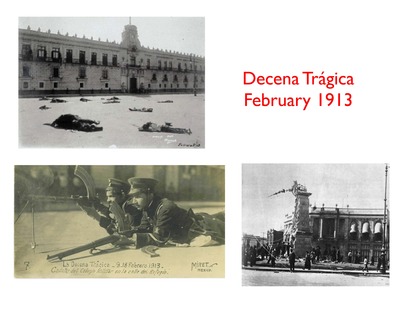 Madero not only faced the opposition of the Zapatistas in the South, but also the members of the Old Regime of Porfirio Díaz, in particular his nephew Félix Díaz. Along with General Bernardo Reyes, the younger Díaz plotted to defeat the revolution. U.S. Ambassador, Henry Lane Wilson supported the conspirators and they plotted against Madero from the basement of the U.S. Embassy. Mexicans deeply resented Wilson’s role in this conspiracy, although the U.S. State Department had not sanctioned his actions. With the support of federal troops, Díaz and Reyes revolted on February 9,1913. This led to 10 days of bloody warfare on the street of downtown Mexico City, costing the lives of hundred of civilians, including women and children and destruction of many buildings (as can be seen in these photos). Instead of defending Madero, General Victoriano Huerta joined the counterrevolutionaries. He took president Madero and vice-president Pino Suárez prisoners and, on February 22nd had them both assassinated, supposedly while they were trying to escape. Huerta’s usurping of presidential power led Venustiano Carranza, revolutionary governor of the state of Coahuila, to rebel against this illegitimate government in the name of the Constitution. With the support of many northerners, he formed the Constitutionalist army. Generals Carranza, Pancho Villa, and Álvaro Obregón, together with the Zapatistas in the south, defeated the federal army of Victoriano Huerta, who was forced into exile in July 1914. They proceeded to disband the federal army that had served the Díaz regime.