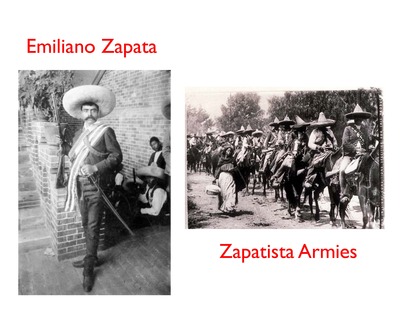 Emiliano Zapata was a relatively comfortable peasant from the town of Anenecuilco in the state of Morelos, which borders on Mexico City. He had earned fame as an excellent horse trainer and worked for various hacendados. Nevertheless, Zapata also emerged as the champion of the campesinos (peasants) in their struggle against local hacendados who had stolen their lands and water resources. When Madero did not follow through with Article 3 to return lands to the peasants, Zapata rebelled against his presidency and issued the Plan of Ayala, calling for revolution and land reform throughout Mexico. Peasants of Morelos and surrounding states of Puebla, Guerrero, and Mexico were steadfastly loyal to their leader, whose honesty and integrity was above reproach. With the motto “Land and Liberty,” Zapata became the major fighter and symbol for agrarian reform and social justice for campesinos in Mexico. Since they could not defeat him, his enemies (General Carranza) engineered his assassination in 1919. His name and motto are still symbols of the struggle for land and social justice today in Mexico, as evidenced by the 1994 uprising in the southern state of Chiapas by the Zapatista Army of National Liberation.