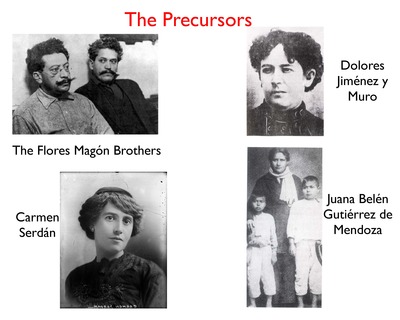 The modernization of Mexico that took place during the Díaz years resulted in considerable growth of the middle and working classes of Mexico. These new social classes now clamored for a voice and the opening up of the authoritarian political system. Various groups of oppositionists, who are now referred to as the Precursors, organized clubs and political parties and published newspapers that gave voice to the grievances of people from all over Mexico. The most famous of these newspapers was Regeneración published by Ricardo and Enrique Flores Magón, who from exile in St. Louis, Missouri reorganized the dormant Mexican Liberal Party (1905) and publicized its progressive reform program (1906), which was a major influence on the revolutionary Constitution of 1917. Women throughout Mexico joined the precursor movement. In the state of Puebla, Carmen Serdán along with her brothers (who were assassinated by the regime) carried on a militant opposition to the dictatorship. Journalists Dolores Jiménez y Muro in Mexico City and Juana Belén Gutiérrez de Mendoza in the state of Durango valiantly denounced the injustices oppressing the people in their regions. Gutiérrez de Mendoza and Jiménez y Muro later both supported the Zapatistas and served them as advisers and propagandists.