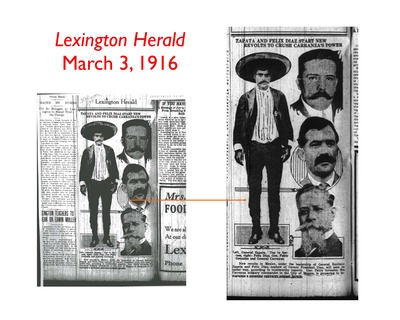 Many major U.S. newspapers and magazines sent in their own reporters to provide stirring accounts of battles of the Revolution. The most famous of these was John Reed, who later died in the Russian Revolution. Sent to Mexico by Metropolitan Magazine, Reed rode with the forces of Pancho Villa for four months and later wrote a popular book about his experiences, Insurgent Mexico. While not all papers could afford their own reporters, the press in the United States followed the events of the Mexican Revolution closely, including, as we see here, The Lexington Herald. On March 3, 1916, our local newspaper reported on attempted revolts against the Carranza government. From the south, the Zapatistas opposed the First Chief for his failure to distribute land to peasants and Porfirio Díaz’s nephew, Félix Díaz, was still trying unsuccessfully, to reestablish the old regime. The violent phase of the Revolution began in 1910 and concluded in 1920.