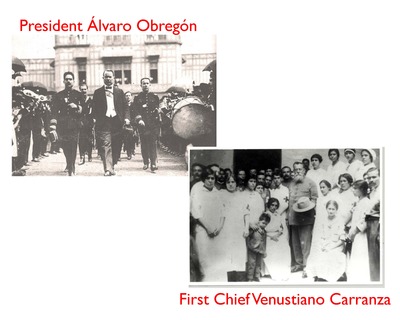 Venustiano Carranza, born in the northern state of Coahuila, came from a well-to-do ranching family and had served as a Senator during the regime of Porfirio Díaz. When he turned against Díaz, Madero named him Governor of Coahuila and in that capacity he refused to recognize the illegitimate government of Victoriano Huerta and swore to defend the Constitution, forming the Constitutionalist Army. He took the title of First Chief of this army as he directed the struggle against Huerta. In March 1913 he published the Plan of Guadalupe, which promised social reforms for Mexico. In 1916, he was elected president of Mexico although the Revolution was still raging in many regions. Carranza received considerable support from the women of Mexico and Hermila Galindo achieved fame as a carrancista propagandist. Here he can be seen surround by nurses serving the Constitutionalist cause. During his presidency, in 1917, a constitutional convention convened and produced the most socially progressive constitution in the world to date. When he tried to impose his own candidate for president in 1920, he was assassinated. Álvaro Obregón hailed from the northern state of Sonora. He was a chickpea farmer and inventor who joined the Revolution once Madero became president. He served in the Constitutionalist Army as the General of the Division of the Northwest. A very able politician who understood that Mexico was now a mass society, he recognized the importance of including workers and peasants and their demands in the new regime, something that Carranza was loathe to do. For example, Obregón defeated the Villistas at the Battle of Celaya in 1915, and in the middle of battle, decreed a minimum wage for workers. Believing he was the right person to follow Carranza in the presidency, Obregón, backed by his Sonoran colleagues and the Plan of Agua Prieta, revolted against Carranza´s attempt to impose another candidate. Obregón served as the first postrevolutionary president from 1920-1924 and distributed some land to peasants and substantially advanced education in Mexico. However, having been reelected to the presidency in 1928, he was assassinated by a Catholic zealot before he could be inaugurated.