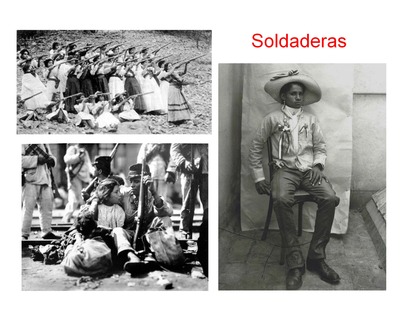 The soldaderas were the women who accompanied the soldiers of all sides during the Revolution. They functioned as the quartermaster’s corps foraging for food and wood to cook soldiers’ meals and wash and mend their clothing. They nursed the wounded and even acted as undertakers burying the dead. They served as sexual companions for the soldiers. Many soldaderas followed their husbands, brothers, fathers, and friends to war; often when their male companion fell in battle, they would pick up his rifle and continue to fight. Others joined specifically to enter combat and dressed in male attire. Women also acted as spies and couriers for the armies. Consequently, there would have been no revolution without the labor and support of the soldaderas since the few armies had departments dedicated to supplying their soldiers’ daily needs. Nonetheless, in the aftermath of the Revolution, the soldaderas were maligned as prostitutes and camp followers in order to erase their vital role in the Revolution and preserve patriarchal rule in Mexico. Only about 300 of thousands upon thousands of soldaderas ever received military pensions from the government in recognition of their service.