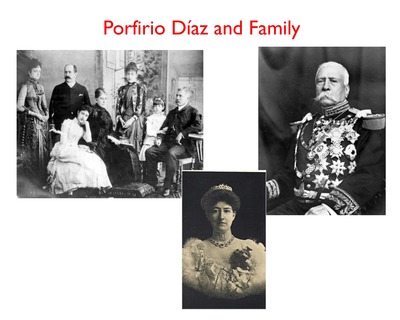 In 1876, General Porfirio Díaz took power by force. He ruled Mexico for over thirty years, until May 1911 when he was forced to resign and go into exile by the Mexican Revolution. During his dictatorship, Mexico modernized much of its infrastructure, agriculture, and industry but factory workers and peasants were cruelly exploited and lived under harsh conditions. He repressed any resistance and ruled through a motto, “Order and Progress,” that emphasized political stability and economic development. Although he was of lower middle class origins, when his first wife died, he married Carmen Romero Rubio, from one of the aristocratic families of Mexico City, who was thirty years his junior. Daughter of one of his former adversaries, in this manner Díaz reconciled opponents to his regime. It was said that doña Carmen worked hard to polish this once rough military leader in order to prepare him for elite society. While his regime brought relative peace to the nation, it exacerbated the poverty of the great majority of Mexicans. He died in exile in Paris in 1915.