UKnowledge > College of Arts & Sciences > Passport to the World > ¡Viva México! > Writings of the Aztecs, Mixtec and Maya > 9 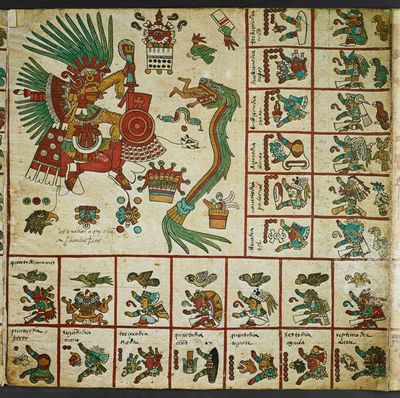 The Codex Borbonicus is among the most famous of Aztec codices. Painted in traditional Aztec style on screen-folded bark paper, it is generally considered an early colonial period copy of a pre-Columbian original to which Spanish glosses have been added. In addition to a 365-day solar calendar, cultures throughout Mesoamerica used a 260-day sacred almanac (tonalpohualli in the Nahuatl language of the Aztecs) in which 20 named days were paired with 13 numerals, each advancing one count per day. Within this cycle, the sequence of numerals would repeat 20 times, each of these 13-day periods constituting a trecena in the language of the Spanish conquerors. On this page of the Codex Borbonicus, the days of the trecena are listed around the bottom and right edges with their associated deities and birds. Numerals are represented by dots and day names by pictorial glyphs. this particular trecena begins on a day One Dog, followed by Two Monkey, Three Grass, and so on, ending on a day Thirteen Wind in the upper frame on the left side of the double column on the right. The large square contains the patron deities of the trecena, Xipe Totec (the Flayed One) and Quetzalcoatl (the Feathered Serpent) with associated divinatory symbols.