UKnowledge > College of Arts & Sciences > Passport to the World > ¡Viva México! > Writings of the Aztecs, Mixtec and Maya > 8 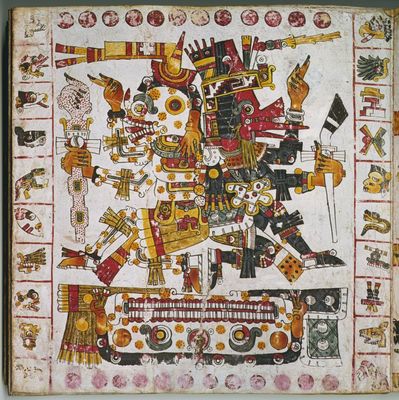 The Codex Borgia is the most famous of four pre-Colombian codices that make up the “Borgia Group,” painted in the Mixteca-Puebla style by scribes who are thought to have lived in the area the modern Mexican states of Puebla and Tlaxcala. The screenfold manuscript is painted on deerskin prepared with a gesso-like coating. Similar in theme to the Aztec Codex Borbonicus, the Borgia features a page-by-page portrayal of the various divisions of the sacred 260 day calendar, including the division of the calendar into trecenas, twenty "months" of thirteen days with a different god presiding over each trecena. On the page illustrated here, two of the Central Mexican creator gods are depicted back-to-back over an upside-down mask representing the underworld. On the left, the skeletal god of the underworld, Mictlantecuhtli, holds a scepter formed from a pustule-covered human arm. On the right, the long-beaked wind god, Ehecatl (associated with both Venus and the Feathered Serpent) wears the cut shell and cone-shaped hat that are among his principal attributes. The twenty trecenas are represented by their beginning day signs in the columns on either side of the central image, the life-giving force of Ehecatl influencing half of them, while Mictlantecuhtli rules the others.