UKnowledge > College of Arts & Sciences > Passport to the World > ¡Viva México! > Writings of the Aztecs, Mixtec and Maya > 7 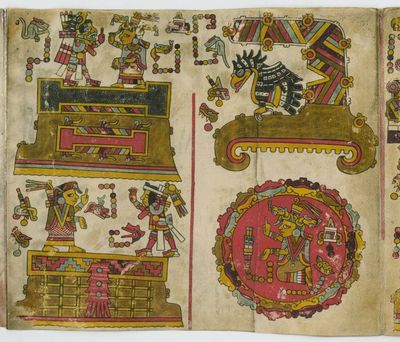 Housed in the Austrian National Library, the “Vienna Codex” (Codex Vindobonensis Mexicanus 1) is painted in a similar style to the Codex Zouche-Nuttall and chronicles the history and genealogy of rulers from Tilantongo as well as the divine origins of dynasties from a place called Apoala or Yuta Tnoho in Mixtec. This codex probably belonged to the last pre-Hispanic ruler of Tilantongo, Lord 4-Deer, and was given to the Spanish shortly after their arrival in 1519. Interestingly, the pages of this codex were numbered backwards because early attempts at iconographic decipherment did not understand the proper reading order. Thus, the images from page three shown here are actually near the end of this narrative, which continues on the reverse of the manuscript. The images are read from the bottom right corner, up and over, and ending with the image in the bottom left corner. This page begins with Lady 9 Reed at a place called “Stone Enclosure” and then moves up to an event at “Cave of the Eagle.” In the upper left corner Lord 10-Lizard and Lady 11-Serpent meet at “Ballcourt Hill”—the ballcourt represented as a pair of horizontal I-shaped motifs. Finally, at the bottom left Lady 8-Deer, the figure to the left, and Lord 7-Wind are married at place called “Town of Blood.” Recent work suggests that these ambiguous, mythical-sounding locations might have been located in the Nochixtlan Valley and were part of an important Mixtec procession that sought to place certain divine rulers within a sacred landscape.