UKnowledge > College of Arts & Sciences > Passport to the World > ¡Viva México! > Writings of the Aztecs, Mixtec and Maya > 5 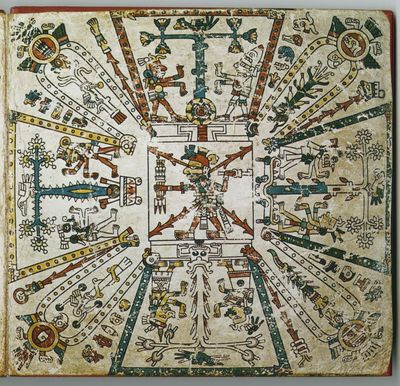 This image comes from the Codex Fejérváry-Mayer, an Aztec screen-fold book painted on deerskin parchment, and depicts the quadripartite cosmos and its relation to the sacred 260-day calendar called the tonalpohualli. In the center of the page stands the fire god Xiuhtecuhlti holding a bundle of spears and wielding an atlatl. Flanking him in the four cardinal directions are different types of trees, and in the interstices of these directions are birds that each bear one of four year signs. A closer look at these inter-cardinal directions also shows jagged streaks of red which represent the four dismembered pieces of Tezcatlipoca. According to Aztec mythology, this dismemberment of Tezcatlipoca established space and direction thereby creating the cosmos. Of final note is the presence of five motifs that appear between the four trees and the birds that bear the year sign. Each of these motifs represents one of the 20 trecenas, or 13 day periods, that compose the sacred tonalpohualli. Thus, this entire tableau recounts a recurring theme in Mesoamerican art wherein the act of cosmological creation culminates with sacrifice and the partitioning of the four cardinal directions.