UKnowledge > College of Arts & Sciences > Passport to the World > ¡Viva México! > Writings of the Aztecs, Mixtec and Maya > 4 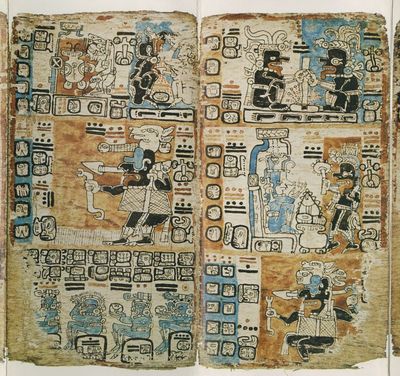 The Madrid Codex was probably created in Yucatán between A.D. 1200 and 1450, although some scholars have argued it was painted in northern Guatemala late in the sixteenth century. Soon after it was taken to Europe the codex was split into two pieces, the “Troano,” named for early owner Don Juan Tro y Ortolano, and the “Cortesianus.” It is therefore sometimes called the Tro-Cortesianus.

The 112 pages of the Madrid Codex contain 250 separate almanacs that record dates in the 260-day tzolkin cycle. In general, each almanac contains a set of dates, a glyphic caption, and a picture. On these two pages we see six almanacs, each associated with a different deity or pair of deities. The two deities in the upper right hand picture start a new fire at the center of creation, surrounded by glyphs for (clockwise from upper right) east, south, west, and north.

Paxton, M. (2001) The Cosmos of the Yucatec Maya: Cycles and Steps from the Madrid Codex. University of New Mexico Press, Albuquerque.