UKnowledge > College of Arts & Sciences > Passport to the World > ¡Viva México! > Writings of the Aztecs, Mixtec and Maya > 14 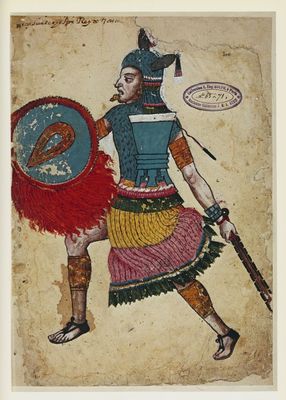 The early 17th century Codex Ixtilxochitl was written in Spanish and illustrated by an artist or artists familiar with European as well as indigenous painting traditions. It is named for Fernando de Alva Cortés Ixtlilxochitl, a member of the ruling family of Texcoco, one of the three allied governing towns of the Aztec Empire, who was born between 1568 and 1578 and died about 1650. This page shows Ixtilxochitl’s ancestor and king of Texcoco, Netzahualcoyotl (1402-1472), in warrior costume. One of the great figures of Mexican “prehistory,” Nezahualcoyotl was known as a wise ruler, architect, scientist, and poet, in contrast to this bellicose portrayal. Among his most beautiful poems is “Not forever on Earth.”