UKnowledge > College of Arts & Sciences > Passport to the World > ¡Viva México! > Writings of the Aztecs, Mixtec and Maya > 10 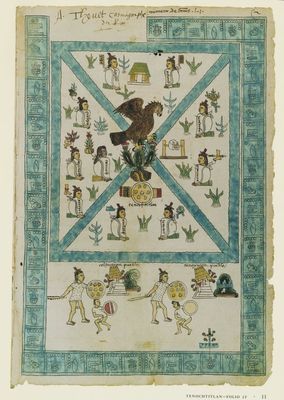 The Codex Mendoza was commissioned by Antonio Mendoza, the first Viceroy of New Spain, around 1541, just 20 years after the conquest of the Aztec capital, Tenochtitlan. Intended to inform King Charles V of Spain about his recently conquered subjects, the Codex Mendoza was painted by indigenous scribes under the supervision of Spanish clerics, who wrote Spanish glosses for the Aztec characters. The Codex Mendoza was painted on European paper and bound in European style, unlike the indigenous pre-Columbian books of Mexico, which were painted on bark paper or deer skin and folded like a screen.

The Codex Mendoza comprises three parts: a chronicle of the Aztec kings from the founding of Tenochtitlán in 1325 through its conquest in 1521; a list of tribute from 39 provinces containing some 400 towns conquered by the Aztecs; and a pictorial depiction of everyday life among the Aztecs, including the training of children year-by-year.

This opening page of the codex depicts the founding of Tenochtitlan on an island in Lake Texcoco, where, it was foretold, the wandering Mexica tribe would find an eagle perched on a cactus growing from a stone. Modern viewers will recognize this allegorical symbol as the central element in the Mexican flag. The crossed bands of clear blue water mark Tenochtitlan as the center of the cosmos. Seated around the eagle amid the plants of the marshy lake are the ten founders of Tenochtitlán, lead by Tenoch (with darkened face), whose name glyph ("stone cactus fruit") appears behind him. At the bottom of the page warriors grasping the hair of their captives hold an obsidian-edged sword and a club before burning temples representing early victories over the towns of Colhuacan and Tenoyucan.

Treasures of the Bodleian; The Codex Mendoza. Electronic resource, http://treasures.bodleian.ox.ac.uk/Codex-Mendoza.