UKnowledge > College of Arts & Sciences > Passport to the World > ¡Viva México! > Writings of the Aztecs, Mixtec and Maya > 1 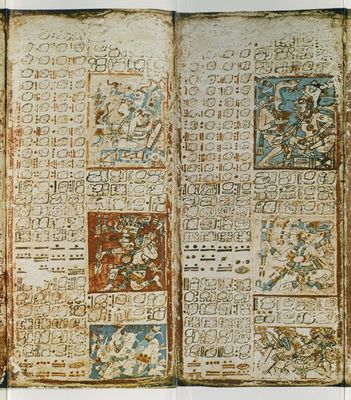 When the Spanish conquered the Yucatán peninsula, they burned hundreds of indigenous books. Today only four of these survive, the Dresden, Paris, Madrid, and Grollier. Painted on fig-bark paper or treated animal skins and folded like a screen, the known codices contain a series of almanacs that associate days in the 260-day tzolkin or 365-day haab calendar with earthly and astronomical events and cycles.

The images shown from pages 49 and 50 of the Dresden Codex were painted by Maya scribes on pressed fig-bark paper coated with lime plaster between A.D. 1200 and 1400 in Yucatán. They chronicle the 584 day cycle of Venus. Due to the astronomical cycle of Venus, it is often called the Morning Star and Evening Star because it is the last celestial object to disappear from the morning sky and the first celestial object present in the night sky. Among the ancient Maya, the ability to predict astronomical events was a way to foretell the future. On the left side of the pages, “bar and dot” numerals — a bar equaling five and a dot equaling one—count the various phases of Venus and its visibility in the sky, while on the right side deities embody the “rebirth” and “death” of Venus as it rises and sets.