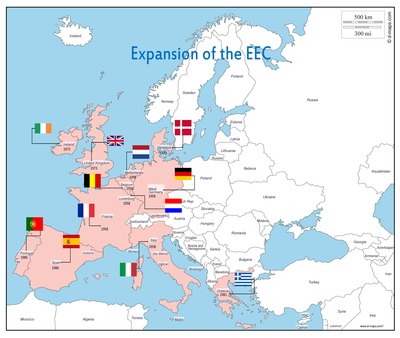 At this point, the European Economic Community began to expand. Plans for a common currency began and an exchange rate mechanism was created for the current rates to fluctuate against each other.

The first expansion was January 1, 1973 when Denmark, Ireland, and the United Kingdom joined the EEC. This would be the first of many expansions. On June 7-10, 1979, EEC citizens were able to directly elect members of the EEC parliament for the first time. Originally, they were delegated by national parliaments. As a result, parliament’s influence raised.

On February 17, 1986, the Single European Act was enacted, and it hoped to create a single market among EEC countries. It would also give more power to parliament and increased powers in environmental protection. The late 80s were also significant for the collapse of Communism in the Eastern European countries, and unification of Germany.