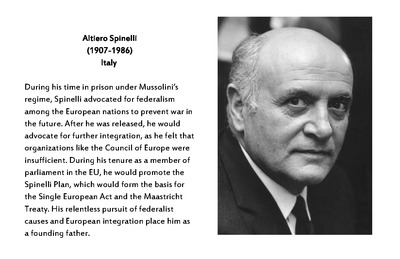 During his time in prison under Mussolini’s regime, Spinelli advocated for federalism among the European nations to prevent war in the future. After he was released, he would advocate for further integration, as he felt that organizations like the Council of Europe were insufficient. During his tenure as a member of parliament in the EU, he would promote the Spinelli Plan, which would form the basis for the Single European Act and the Maastricht Treaty. His relentless pursuit of federalist causes and European integration placed him as a founding father.