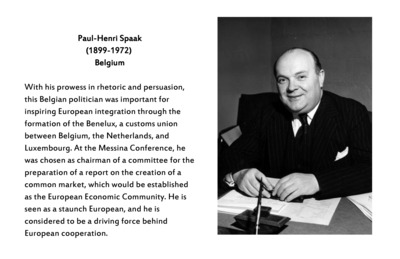 With his prowess in rhetoric and persuasion, this Belgian politician was important for inspiring European integration through the formation of the Benelux, a customs union between Belgium, the Netherlands, and Luxembourg. At the Messina Conference, he was chosen as chairman of a committee for the preparation of a report on the creation of a common market, which would be established as the European Economic Community. He was seen as a staunch European, and he was considered to be a driving force behind European cooperation.

Original description: "Portrait of Paul-Henri Spaak, seated at desk. He was the foreign minister from Belgium. From: Beth Gore."