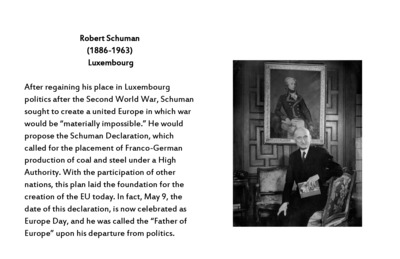 After regaining his place in Luxembourg politics after the Second World War, Schuman sought to create a united Europe in which war would be “materially impossible.” He would propose the Schuman Declaration, which called for the placement of Franco-German production of coal and steel under a High Authority. With the participation of other nations, this plan laid the foundation for the creation of the EU today. In fact, May 9, the date of this declaration, is now celebrated as Europe Day, and he was called the “Father of Europe” upon his departure from politics.