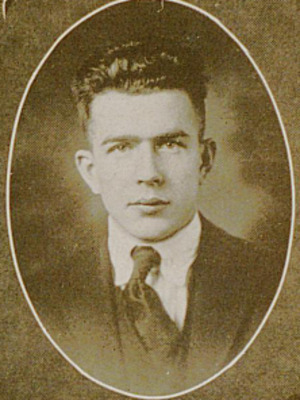 "Midnight shout and revelry Tipsy dance and jollity." Carl has a famous motto and he is following it to the letter. However, he is a good student and an orator of much renown. U.K. will lose in him a good student, a deep thinker and a logical legal mind.

Carl Henry Denker (November 22, 1897 - June 13, 1959) was born in Paducah, Kentucky to Charles Henry Denker and Arah S. Brown. Denker practiced law in Paducah for many years after receiving his LL.B.. He was also, at various times, the Paducah city attorney and a judge. From 1940 to 1942, Denker served as a United States deputy marshal in Louisville. Denker later moved to Phoenix, Arizona where he worked for the Mullen Kille Co. as a census director for their city directory publications. Denker was married three times--his wives included Eva Elizabeth Wilson (m. 1929, d. between 1934 and 1940), Carrah Lea Moncrief (m. 1944, d. by 1946), and Eldora Gibbs (m. 1946).