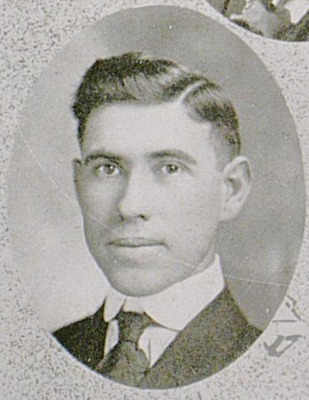 Already bearing the burden of a B.A. degree from the "Lone Star" State, W. P. drifted in here for a few years with the staunch squadron under Dean Lafferty's command. He fights hard for the things he thinks are right.

Walker Porter Mayo (November 27, 1884 - November 14, 1946) was born in Prestonsburg, Kentucky to John Dick Mayo and Ann Porter. Before attending the University of Kentucky, Mayo taught at the Floyd County high school in Prestonsburg and received a BA degree from a college in Texas. Mayo practiced law in Prestonsburg after receiving his LL.B.. He served, at times, as a special judge in Floyd County. Mayo married Reba Elizabeth Harkey in 1917. The couple had three sons. One son, Louis Harkey Mayo, was a distinguished legal educator who taught constitutional law at George Washington University. Another son, Dick Erwin Mayo, studied law at the University of Kentucky College of Law before enlisting in the United States Air Force during World War II.