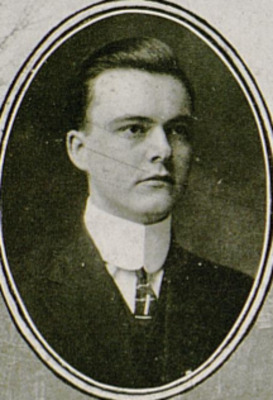 "Quiet and unassuming, but still water runs deep." "Dick" is a manly youth, having received much good training from Uncle Sam at West Point. He has been here three years, delving into the profound mysteries of the law. It will be hard to tell just when his "first case" is pleaded, because there seems to be an affinity between him and girls, which began nobody knows when. He came with a reputation as a "ladies' man," and he has lived nobly up to it. But this is not all. Dick is a student, and will make good in his profession. He is a jolly good fellow, whom everybody likes.

Richard Vinson Garred (January 19, 1890 - May 18, 1926) was the son of Arnoldus Garred and Jennie Vinson. Arnoldus Garred was a clerk in the Lawrence County Circuit and Criminal Courts. Richard Garred first attended the Kentucky Military Institute where he graduated in 1909. He briefly attended the United States Military Academy at West Point before returning to Kentucky to study at the College of Law. Garred returned to Lawrence County after receiving his LL.B. and began practicing law in Louisa. He later became head of the title department for the Guaranty Bank & Trust Company. Garred married Ollie Mae Clarke in 1913.