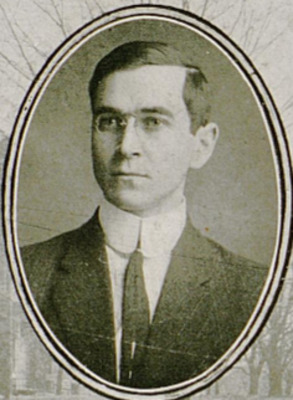 "Love is worst when it comes late in life." Shades of Dignity! When Jones puts on his "specs" and grabs his Senior cane, many maidens ask, "Who is this handsome man of dignity?" But be it known, this dignity is assumed to hide his bashfulness. Jones made a marvelous record in the 'University; he never strolls nor flirts, "seldom he dances"; he is a peaceful citizen. Don't be misled. Jones talks law to the ladies. He belongs to the "Marion Bunch," but is neither a phenominal orator, an extraordinary bluffer nor a speedy courter--all of which are typically "Puerile." Cheer up, Jones, the worst is yet to come!