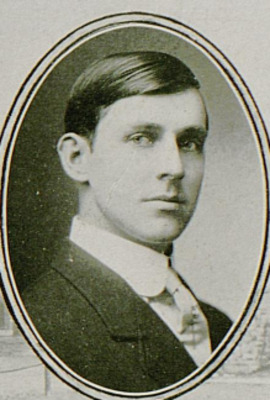 "I only speak right on." DeAtley came here last year from the Eastern Kentucky State Normal School, and like all normalites he had much to learn of real college life. He is taking law, and doing much classical work "on the side." But Criminal Law is his strong point. It is this in which he expects to specialize, and woe be the criminal he prosecutes, but blessed be he whom he defends. He is one of the hardest workers and best students in the law department.

Harry Berkeley* DeAtley (December 29, 1888 - April 11, 1964) was the son of Severn Pollitt DeAtley and Nancy Adelia Coryell. DeAtley attended the Eastern Kentucky State Normal School before entering the law program at the University of Kentucky. After receiving his LL.B., DeAtley began work with the Internal Revenue Service to prosecute prohibition cases. DeAtley later became an attorney under the United States Justice Department in the Taxes and Penalties Division. DeAtley married Margaret Campbell around 1920.

*Also listed as 'Barkley' in some sources.