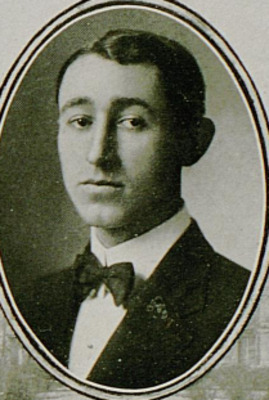 "For a woman's only a woman, But a good cigar is a smoke." "Ick" has been here for four years. At first, being enchanted by visions of building bridges and constructing railroads he began Civil Engineering. But, alas and alack! this required Physics and Math, so being impressed that his talent lay elsewhere, he tried law. Here, at last, he was at home, for he is a natural lawyer. He is a good worker, and a hard one, and is always busy working on some puzzling point in law which interests him. He is very popular among all who know him, and everywhere he may go he will make good.

Carl C. Croft (October 10, 1888 - January 16, 1989) was the son of George Jacob Croft and Cora Belle Howard. Croft had a great interest in the railroad industry. After obtaining his LL.B. from the College of Law, he moved back to his hometown of Fulton and began working for the Illinois Central Railroad Company. Croft worked for the ICRR Co. for 52 years before his retirement in 1965. Additionally, Croft served in the United States Army during World War I. Croft married Neva Mae Jordon in 1922.