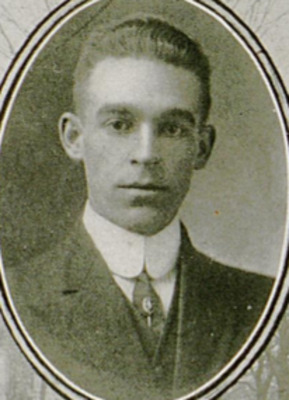 "'Tis I, be not afraid." "Skeeter" is a man of much note. Having ambled among the classic corridors of K. S. U. for some "moons" he has acquired a fund of knowledge upon divers subjects unusual for one of his years. He is exceedingly proud of his voice and, being scrupulously careful thereof, 'tis said that he nightly bathes his throat in a copius solution of rock candy and Sam Clay Bitters. Morpheus is one of "Skeeter's" boon companions, and he objects to all forms of hard work, believing that to be the portion of men of little minds and creatures of low degree.

James Azure Wilmore (April 26, 1888 - September 9, 1933) was born in Adair County, Kentucky to William Wilmore and Eliza Grissom. Wilmore spent his entire legal career in Lexington after graduating from the College of Law. In addition to private practice, Wilmore was Lexington's assistant corporation counsel between 1920-1925. Wilmore died in 1933 due to complications from asthma.