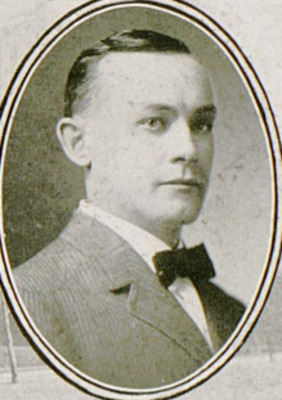 "He reads much; He is a great observer, and he looks Quite through the deeds of men." Charles came to us from Valparaiso University. He is one of the most diligent workers, and soundest thinkers of the law department. He is most unobtrusive, but his heart is warm and his friendships are quick and lasting. There is only one thing at which he absolutely draws the line, and that is on being in the proximity of any female. The cause of this decided aversion for the fairer sex well, nobody knows just what it is. He takes an active interest is all things pertaining to his chosen work, however, and he will make a worthy member of a noble profession.

Charles Ransome Otey (December 23, 1879 - April 7, 1950) was born in Williamson County, Illinois to James Thomas Otey and Nancy Caroline Edwards. Otey attended Valparaiso University before attending the University of Kentucky College of Law. Otey returned to Illinois after graduation where he began a long career at the Williamson County Loan and Improvement Association. Otey married Bertha Neely, the daughter of a Williamson County judge, in 1919.