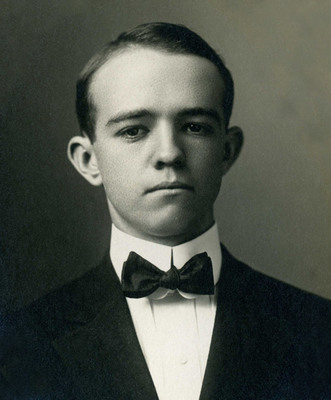 For six long years "Peg" has been sojourning at this Institution. Of all those ambitious youngsters who entered upon the exploration of Freshman mysteries with him in the long ago, he, like Cooper's Mohican, is the last. However, since his departure from the College of Arts, with that singleness of purpose which characterizes one of his declining years he has forsaken the primrose paths of the social world, turned his back upon all maidens and spends his time in contemplation of the future, when he will take unto himself the fairest of Crittenden's damsels and live happily ever afterward in the realms of connubial bliss.

"Men may come and men may go, but I go on forever."

Virgil Yandell Moore (January 20, 1890 - December 31, 1961) was the son of Alfred Clay Moore and Sarah Amby Stone. Moore practiced law with his brother Neville in Hopkins County after graduation--he later served as Commonwealth's Attorney for the county. He also practiced tax law in Washington, D.C.. Moore retired to Florida in the 1940s. He married Dorothy Ina Price in 1912 and later married Emma Brown in 1943 after his first wife's death.