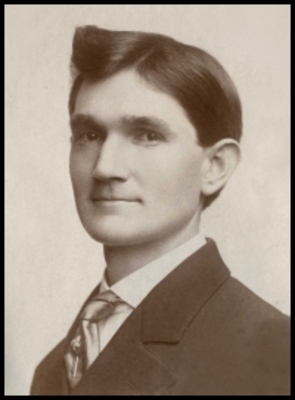 His invasion of civilization proved so successful that it is doubtful if he ever goes back to the land of huckle berries.

"Still possessing the mountain youth, he has the wisdom of a Billy Klair or a Tom Combs."

George Riley Pope, Sr. (November 5, 1882 - May 5, 1986) was the son of William Solomon Pope and Minerva Burkhart. Pope was a school teacher in both Bell and Harlan counties before he attended the College of Law. After graduation, he practiced law in Harlan and handled many cases related to the coal mining industry. Pope was elected Mayor of Harlan in 1917 and also served as fire chief during this time. Additionally, he was county attorney for one term. Later in his life, Pope served as the commissioner of the Harlan Circuit Court. Pope married Verda Asher Howard in 1913--the couple had 10 children and are buried together in Harlan's Howard Cemetery.