An Evening with Angela Davis 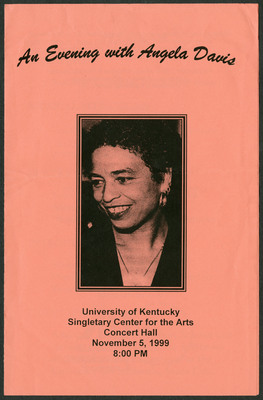 1999 event on the University of Kentucky campus sponsored by Department of English and the Women's Studies Program with a host of supporters. Also part of promotion "50 Years of the UK African American Legacy."

In 1997, Angela Davis came out as a lesbian. In 1999, she delivered an address at Johns Hopkins University’s Living Out Loud, and she focused on how issues of race and class affect the gay movement. That same year, she also lectured at the University of Kentucky. Angela Davis is a political activist, scholar, and author. She is most often remembered for her large and well shaped afro, and her radical feminist and activist years as a member of the Communist Party and as an associate of the Black Panther Party. In 1970, she was a fugitive, who was arrested, charged, tried, and acquitted of conspiracy in the armed take-over of a Marin County courtroom when four people died.