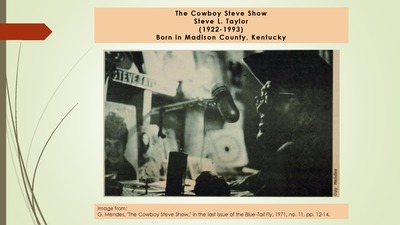 Steve L. Taylor was born in Madison County, KY. He was a musician, bandleader, song writer, a local celebrity, and a very small town radio man. Taylor taught himself to play the guitar, fiddle, and mandolin. He started his first country music band when he was 14 years old. As a musician, he played in the Lexington and nearby vicinity. As a song writer, three of Steve Taylor’s songs were recorded. As a radio man, Steve L. Taylor was owner of station WSEV in Lexington, KY. The station broadcast the Cowboy Steve Show. The station signal reached a block or two from Taylor’s studio which also served as Taylor’s studio apartment where he lived. WSEV was a country radio station with Taylor’s ad-lib commercials, all broadcast by Taylor’s self-built transmitter. Steve L. Taylor died in 1993 and he is buried in the Lexington Cemetery.