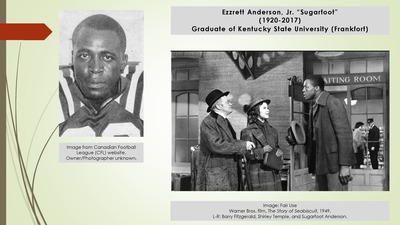 Ezzrett Anderson, Jr., known as “Sugarfoot,” was born in Nashville, AR. He was an athlete, an actor, radio show host, and a businessman. His nickname comes from his quick defensive skills on the football field. He is a graduate of Kentucky State University in Frankfort, KY, where he was also an outstanding football player. He was an all-around athlete who had also played basketball and ran track. (His father had played in the Negro Baseball League.) Sugarfoot Anderson was one of the first graduates from a Historically Black College and University (HBCU) to play professional football. He played with the Hollywood Bears, the Los Angeles Dons, and the Los Angeles Mustangs. He played in the Canadian Football League from 1948-1954. He was inducted into the Alberta Sports Hall of Fame in 2010. After his football career, Sugarfoot settled in Calgary, Alberta, Canada. His acting debuted was in 1949 film The Story of Seabiscuit. [Seabiscuit (1933-1947) was a champion thoroughbred racehorse that was born in Lexington, KY.] In the movie, Sugarfoot Anderson played the role of the subservient, Walkin’ Murphy, Mr. Milford’s Boy. In the scene on the slide, Walkin’ Murphy had come to the Lexington train station to pick up Mr. Milford’s guests. One of his lines was, “Welcome to Kentucky, the Bluegrass state.” Ezzrett Anderson, Jr. lived a very long life, he died in Calgary at the age of 97 in 2017.