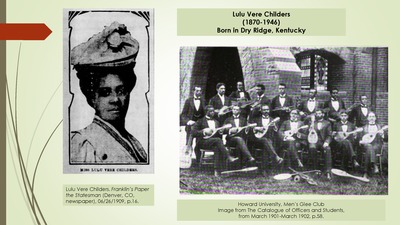 Lulu Vere Childers, born in Dry Ridge (Grant County), KY, is best known as a faculty member at Howard University from 1905-1942. She founded the school’s conservatory of music in 1913 and the Howard University School in Music in 1918. The Lulu Childers Hall is named in her honor and the building houses the Division of Fine Arts. Lulu Childers was a close friend to Marion Anderson. When Anderson was denied the opportunity to perform before an integrated audience in Constitution Hall in Washington, D.C., the Howard School of Music Concert Series Committee, led by Lulu V. Childers, sought to sponsor the Marion Anderson Concert in another location in Washington, D. C. Lulu V. Childers died in Howell, MI on March 6, 1946 and she is buried in Lakeview Cemetery.