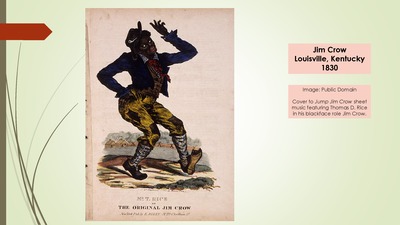 In 1830 Thomas D. Rice, a white man who did blackface stage performances, was in Louisville acting and doing stagehand work at the City Theatre. Nearby was a livery stable where an enslaved man named Jim Crowe worked. Thomas D. Rice studied Jim Crow’s songs, dancing, and clothing, and incorporated all into a black face stage performance that became a major success in the U.S. and England.