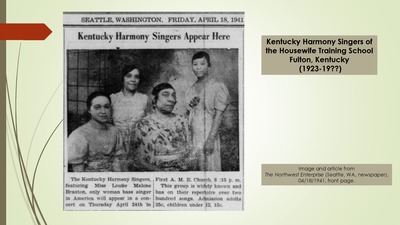 The Kentucky Harmony Singers were from Fulton, KY. The group was formed around 1923 as a fundraising effort for a building for the Housewives Training School for Colored girls and women in Fulton. They were a quintet led by Mrs. Louise Malone Braxton who was an educator, lecturer, and female bass singer. The women traveled about the United States singing in churches, performing Negro spirituals and southern plantation and jubilee songs. The group also raised funds to pay for a dormitory and industrial department. The Housewives Training School taught students how to be good housewives and the art of homemaking. The group was still performing when the picture and article in the slide were published in a Seattle, WA newspaper in 1941. Louise M. Braxton was credited with founding five schools. She was a graduate of Tuskegee Institute.