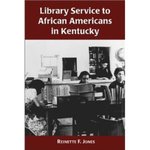 Library Service to African Americans in Kentucky, from the Reconstruction Era to the 1960s

Although the majority of libraries in the state of Kentucky did not offer services to African Americans between the years 1860 and 1960, public libraries did employ them. The Louisville Public Library, a leader in the development of library management and education from 1905 to 1925, began in 1912 offering classes to train African American women to be librarians in segregated public library branches that were opening in the South. In 1925, an academic library program was developed for African Americans at the Hampton Institute in Virginia to continue the work that began in Kentucky. This movement culminated with Helen F. Frye's becoming the first African-American to graduate with a Master of Science degree in library science from the University of Kentucky Library School in 1963.

This work moves from the provision by Berea College of the first library services to a fully integrated student body in 1866 through the integration of the state's only accredited library science program at the University of Kentucky in 1949 to the civil rights initiatives of the 1960s. Also addressed are the interconnectedness of libraries and societal events and how one affected the other.