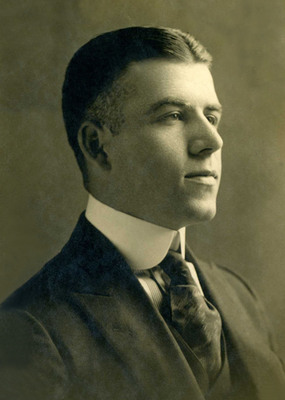 With magnificent voice and superb histrionic ability, "Jap" or "Mac," has 'made a record as the winner of speaking contests. He doesn't care what he speaks about, but Peace and Prohibition are "favorites" which he rode until, like Casey Jones' engine, they left the rail. Y.M.C.A. is the Mount on which he will make his "war record." His ambition is to represent the home of "Bond and Lillard " in the legislature and then out-Bryan Bryan on the Chautauqua platform. His motto is: "Why work when you can play?" and his favorite scripture: "Eat, drink and be merry, for tomorrow you may die."

Jasper Johnson McBrayer (July 1, 1897 - February 17, 1948) was born in Anderson County, Kentucky to Louis McBrayer and Sallie Hicks. He was the brother of College of Law 1915 graduate Major Wesley McBrayer. The brothers practiced law together in Lawrenceburg after Jasper's graduation. McBrayer later practiced in Lexington. He represented Fayette County as a senator in the Kentucky General Assembly between 1930 and 1932. McBrayer married Charlotte Florence Kitchen in 1926.