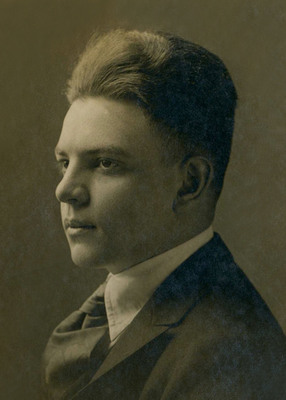 Sam is a most resourceful boy, whom we fear has never exerted himself to the full measure of his ability. Shrouded in the languid atmosphere of the Old South, he dreams and philosophizes like a true Kentuckian. Although he is by no means speedy, we will always "play him straight," anyhow. He is the friend of everybody. All the girls say he is "just perfectly lovely," but cupid's dart has never pierced his stout, big heart. Sam has great ambitions and lofty ideals. He is too young to know what he is going to do, but whenever he decides, it will be well done.

Samuel Helm Morton (December 1, 1898 - August 12, 1961) was born in Owensboro, Kentucky to William C. Morton and Sallie Helm Dix. After receiving his LL.B., Morton worked for several years as a teacher at the Owensboro Senior High School. He later became assistant principal and then principal of that institution. He later worked at a high school in Northampton, Massachusetts.