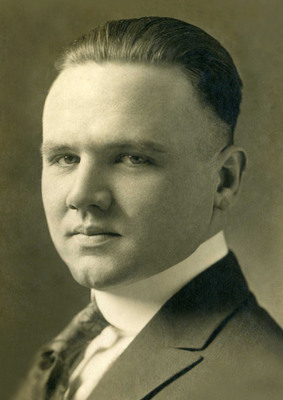 "Cupid's" fame rests not on things written and said but on the arduous greatness of things done."

He is a thunderbolt on the gridiron. It is rumored that he played backfield in high school, but no one believes it. However, he made a touchdown Thanksgiving 'I7, reminding the spectators of the movements of an elephant in the hosts of Xerxes or a tank in No Man's Land. Enjoys a dance every Thanksgiving night. Is as polite as Lord Chesterfield. His motto seems to be: "Take Life Easy," and his ambition to represent the Sixth District in Congress.

Frank Walton Dempsey (April 24, 1897 - February 1969) was born in Bakersfield, California to Grant Dempsey and Nellie Blythe. Dempsey worked in the automotive industry after graduation. He worked as a automobile salesman and later owned his own repair garage in Erlanger, Kentucky. Dempsey moved to Florida prior to 1950 and operated a garage there. Dempsey married twice--his wives were Laura Frances Riddell (m. between 1920 and 1924, separated before 1950) and Margaret B. [last name unknown] (m. before 1950).