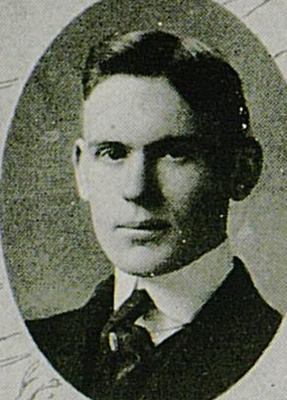 "Shoot a nickel!" This big-hearted son of the mountains somehow inspires us with confidence. Next to Y. M. C. A. work "Jitney's" greatest delight is in doing you a kindness. As an able lawyer he stands out in his department. His favorite method is to reach it by a general demurrer, argued from common law principles.

Ira Morton Nickell (April 13, 1891 - June 18, 1984) was born in Morgan County, Kentucky to William Ceborn Nickell and Martha Evaline Testerman. Nickell practiced law in Hazard, Kentucky after receiving his LL.B.. He would later move to Huntington, West Virginia to serve as legal counsel for the Federal Gas, Oil & Coal co. and the Kycoga Land Co.--he would be associated with these companies until 1960 and would rise to the rank of vice president in both. In 1926, Nickell moved to nearby Ashland, Kentucky and became a partner in the firm Woods, Stewart & Nickell. He would later be associated with the firm Nickell, Fanning & Rose. Nickell married Mary Sue McLaughlin in 1926. Their son, Morton C. Nickell, graduated from the University of Kentucky College of Law in 1959.