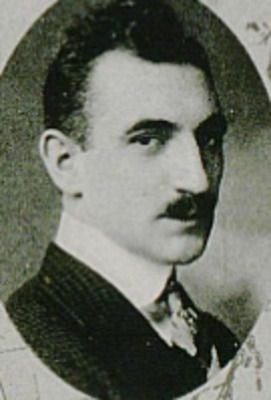 We do not know what "mysterious" reason caused "Jew" to cast his lot at Kentucky State, but he has been airing his mustache around the campus and environs for some time. Mack is a pretty good actor (on the stage) and has self-confidence enough to get by as a lawyer, that is supposing nothing happens to that mustache which is the dream of his soul. Otherwise he might be like a Sampson shorn.

Louis Wallace Macloskey (Mlotkowski) (January 2, 1892 - June 15, 1968) was born in Camden, New Jersey to Stanislaus 'Stash' Mlotkowski and Mary Wallace. Macloskey practiced law in the Camden firm of Stackhouse & Kramer after receiving his LL.B.. After serving in World War I, Macloskey practiced law with Herbert J. Koehler. Macloskey served on the board of directors for several New Jersey companies. Additionally, he served as the president for a investment company and a soap manufacturing company. Macloskey was married twice--his wives were Esther Magdalena Croft (1917-1935) and Virginia Mary Auriemma (post-1935-1968).