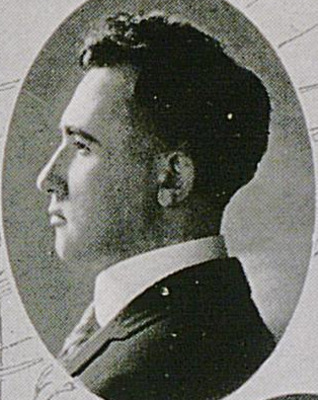 "Ponder well and know the right."

"E. L." is the silent man of the class. When he talks there's something said. He naturally is a faithful exponent of our literary societies. Give him thread and he'll prove his point. When we want to decide some legal question we will go to this determined young lawyer and win--if justice demands it. (And we have the price.)

Earl Lewis Fowler (January 5, 1894 - ) was born in Union County, Kentucky to Thomas D. Fowler and Elizabeth Compton. After receiving his LL.B. in 1915, Fowler continued his legal education at Yale Law School where he received an LL.M.. Fowler returned to Kentucky and began practicing law in Morganfield in 1917. He was elected county attorney shortly after. Fowler served during World War I and took coursework in France at the end of the conflict. He resumed his law practice and served another term as county attorney. Fowler would eventually move to Evansville, Indiana--he stopped practicing law and managed a paint store. Fowler married Mary Juanita Crome in 1919.