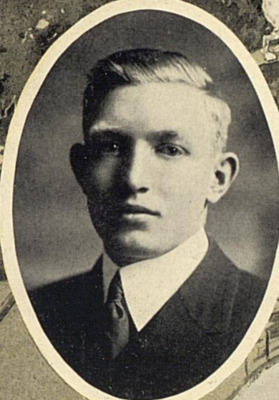 "A harmless wight, despite his threatening mien." "Les" has seriously considered allowing the University to confer several degrees upon him, but after much casting about he picked upon the good "Judge" as the easiest mark and took a chance at law. Honestly, no one can figure out how he expects to make a living at the bar, but "Les" is a favorite child of Dame Fortune, if there ever was one, and she surely will not forsake him this legal venture. His fame rests secure upon that wonderful drop kick from a flowing field of mud in 1911, which saved the day from Central. May his luck never leave him!

Leslie Lee Guyn, Sr. (October 28, 1890 - October 31, 1963) was born in Woodford County, Kentucky to Joel White Guyn, Sr. and Susan Catherine Davenport. Guyn received his LL.B. from the University of Kentucky in 1914. In 1916, Guyn moved to Alberta, Canada to work on his brother's farm. Guyn retired from farming in 1958 and moved to Calgary with his family. He married Juanita Tuttle in 1928.