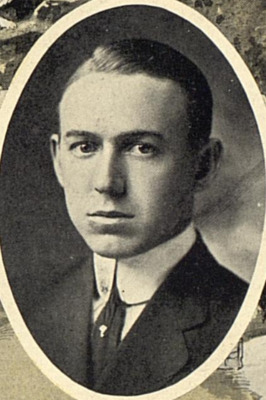 "Foolishness is bound in the heart of a child, but the rod of correction has driven it from him." "Dunk" has known from infancy that the way of the transgressor is hard. From his own words we gather that his mother applied the rod for fear she would spoil the child, and we are glad that she did. At training school in Louisville he weathered many a stormy adventure, and we hear of him charging up and down 5th and 7th streets through furious rock-battles. Here, we are told, his favorite diversion was squad drilling, and this discipline accounts for his exemplary career at State. We know him as a congenial, studious, intellectual lawyer, whom much experience has not robbed of the frolicsome spirit of youth.

Wallace Duncan Hamilton (March 4, 1891 - October 24, 1944) was born in Huntington, Indiana to Wallace Hamilton and Jean Duncan. Hamilton received his LL.B. in 1914 and returned to his family home in Greenville, Kentucky to practice. He served in the United States Army during World War I. Hamilton moved his practice to Versailles, Kentucky at some point between 1920 and 1926. Hamilton was elected Woodford County Attorney in 1941 but was unable to serve his full term in office. He married Jeannette Wasson in 1921.